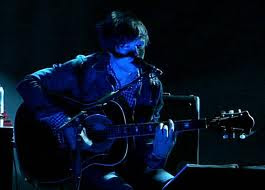 It took a two year retreat from the music industry, a last-minute purchase on London's 'Gumtree' service, a packed tube via Baker Street (Rest Peacefully Gerry Rafferty) and a nervous navigation around London's beautiful, nuclear-bunker like 'Barbican Theatre', but last night we finally got the chance to see reclusive, legendary Rock superstar Ryan Adams and it was well worth the wait and journey. From the joyous, crowd-communicating support of rising star Jesse Malin, to Ryan's own ground-work with the fans we where treated to a perfectly personal evening. As intimate as acoustic gigs are supposed to be, despite the big stage this superstar was place on.

He didn't disappoint treating us to an alluring, over two-hour acoustic set that was both epic and calming, charming and humorous. From self-deprecating, to audience bashing banter, it was all friendly and it was all love. The man who has self-confessed to being a 'p****' and is notorious for his gig-leaving temper was nothing but good-natured last night. Sure his former fronted bands ('Whiskeytown' and 'The Cardinals') where in the rear-view last night but all he needed was his guitar, extensive Dylan-chasing songbook, Lebowski rug, harmonica and his beautiful piano to his right. With all that we where left with some of the most honestly beautiful and simply sublime music we could hear in one night.

In the vast, wonderful wooden theatre the sound was anything but that as it felt velvety smooth. From the well-received opener of 'Oh My Sweet Carolina' to the eagerly requested, excellent encore. Ryan Adams prolifically strolled through his vast catalogue and set with an ease and excellence. Sure there where troubles, his Italian guitar was often out of tune, but he made up for it with banter and bravado and hey this was the guitar he strummed along the way with all his classic albums so that can be forgiven. Despite the hiccups this high-quality performance set the standard for acoustic performers.

Dedicating songs to his respective muses Adams performed 'Amy' and thanked 'Louise'. He also showed us his 'Desire' and charged us with the 'Gold' standard of 'The Rescue Blues' among so many of his fond-favourites. Even if at times his guitar didn't keep up, his vocals sure did from the harmonies to the harmonica. He was note perfect, even sounding soulful as he bared his heart. Still the evening reached perfection when he walked like a wilderbeast over to the piano for some perfect performances. From the poetic 'Sylvia Plath' to a new, nice take on 'New York, New York' that was so good you'll want to go back and hear it one more time...I guess that's why he's playing another night. So if your in the London area why not hit up the Barbican tonight for the end of this double-header and see just why this solo artist is singled-out from the rest? Truly a one-of a kind performer. From the laughter to the tears, to the fans and the technicians, everyone gets involved. You should too. TIM DAVID HARVEY.
Posted by Tim David Harvey at 00:54